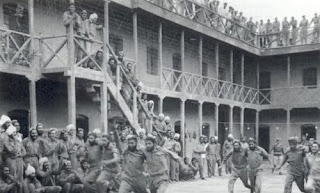 Hey here's a thought maybe we should refuse to take them back into the country?

Let them stay in a Pakistani jail.

WASHINGTON — FBI agents have questioned some of the young Americans arrested in Pakistan as U.S. investigators gather evidence that could lead to a conspiracy charge against them, an American official and another person familiar with the case said Friday.

Agents are working to see if enough evidence exists to charge any of the five Muslim students with conspiracy to provide material support to a terrorist organization, the two people said.

They spoke on condition of anonymity because they were not authorized to discuss the investigation.