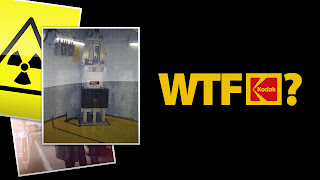 Did they have a zoning variance for a nuclear reactor?

Kodak may be going under, but apparently they could have started their own nuclear war if they wanted, just six years ago. Down in a basement in Rochester, NY, they had a nuclear reactor loaded with 3.5 pounds of enriched uranium—the same kind they use in atomic warheads.

But why did Kodak have a hidden nuclear reactor loaded with weapons-grade uranium? And how did they get permission to own it, let alone install it in a basement in the middle of a densely populated city?

Nobody really knows. Kodak officials now admit that they never made any public announcement about it. In fact, nobody in the city—officials, police or firemen—or in the state of New York or anywhere else knew about it until it was recently leaked by an ex-employee. Its existence and whereabouts were purposely kept vague and only a few engineers and Federal employees really knew about the project.