The dude was potted 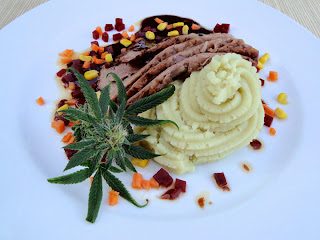 
Man tries to pay for dinner with a bag of pot
Buffalo news.com -

NIAGARA FALLS—A man ordered a take-out dinner from a Niagara Falls Boulevard diner early Saturday and tried to pay for it with a bag of marijuana, police said.

The incident occurred shortly after 2a.m. at the Denny’s restaurant, police said. The man ordered $9.91 worth of food and offered a cashier $1 and the pot in exchange for the meal.

When the cashier refused the deal, the man tried to sell the pot to other customers in the restaurant, police said, before fleeing into a nearby wooded area when the cashier called police.