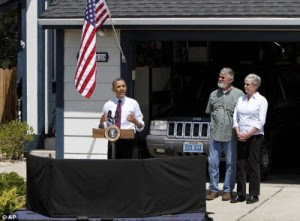 I'm afraid we ain't seen nothing yet.

Strassel: Trolling for Dirt on the President's List
First a Romney supporter was named on an Obama campaign website. That was followed by the slimy trolling into a citizen's private life.
Wall Street Journal -

Here's what happens when the president of the United States publicly targets a private citizen for the crime of supporting his opponent.

Frank VanderSloot is the CEO of Melaleuca Inc. The 63-year-old has run that wellness-products company for 26 years out of tiny Idaho Falls, Idaho. Last August, Mr. VanderSloot gave $1 million to Restore Our Future, the Super PAC that supports Mitt Romney.


Three weeks ago, an Obama campaign website, "Keeping GOP Honest," took the extraordinary step of publicly naming and assailing eight private citizens backing Mr. Romney. Titled "Behind the curtain: a brief history of Romney's donors," the post accused the eight of being "wealthy individuals with less-than-reputable records." Mr. VanderSloot was one of the eight, smeared particularly as being "litigious, combative and a bitter foe of the gay rights movement."