A whole lot of bang for your buck 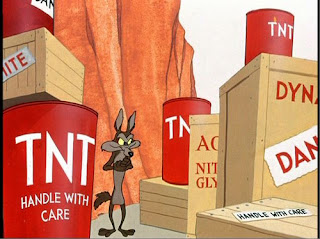 She bought the package at a thrift store?

The residents of a Northeast Side cul de sac were evacuated overnight after a woman brought home a package that turned out to contain dynamite, KSAT-TV reported on its 5:30 a.m. newscast.

The woman, who lives in the 4100 block of Lost Trail, had gotten the package at a thrift store, the station said. When she got home, she opened it and saw that it appeared to contain six or seven sticks of dynamite and a detonator.

Fearful, the woman placed the package in her mailbox and called authorities, KSAT said. Nearby residents were evacuated, and the bomb squad was able to detonate part of the package.