So a horse walks into a bar and the bartender looks at him and says "Why the long face?" 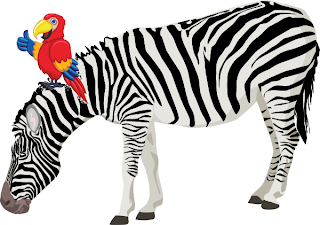 When I first saw this headline I thought it was the start of a bad joke.

Except DWI is not a joke.

Man arrested for OWI with Zebra, Parrot in front seat of truck
By Katie Wiedemann - KCRG-TV

DUBUQUE, Iowa - A Cascade man was arrested outside of a Dubuque bar on Sunday night with a pet zebra and a macaw parrot in the front seat of his truck.

Officers charged Jerald Reiter, 55, with OWI. Police reports say officers stopped him in the parking lot of the Dog House Lounge as he drove away in his truck. According to police, field sobriety tests showed Reiter had a blood alcohol level of .14. The legal limit in Iowa is .08.

Reiter tells KCRG.com that he and his girlfriend, Vickey Teters, see the animals like their kids and often take them for rides. On Sunday night, they say they took the zebra and the macaw to the bar because it often lets people bring their animals inside.