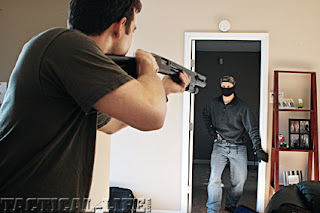 So the family has to retreat out of their house if someone breaks in?

I'll back-up but that's to get my gun.

Texas' “Castle Doctrine” allows residents to use deadly force to protect themselves from attackers in the home, with no duty to retreat. But a top prosecutor in Bexar County opposes the doctrine and said it makes prosecution difficult.

“When we take away the duty to retreat, we make it a situation that encourages violence, not discourages it,” First Assistant District Attorney Cliff Herberg said Thursday night at a forum.

Herberg said Gov. Rick Perry explained it best in a conversation several years ago when he called it “a solution without a problem.”