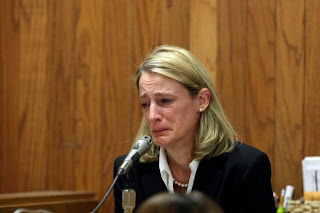 The Jury found her guilty.

The Jury gave her probation.

A friend and neighbor of the victims had this to say:  “We feel Ava's the one paying a life sentence for Julie Bronson's crime, I hope that Julie Bronson is remorseful. I'm not convinced.”

Ava is the 18 month old toddler who has sustained severe brain injuries.


Just another in a long list of human wreckage left in the wake of the plethora of drunken and otherwise wacked-out-of-their-minds intoxicated drivers that plague Bexar County and South Texas like vermin.

A jury Tuesday ordered probation for an international flight attendant who admitted to drinking numerous glasses of wine before taking two prescription Ambien and later plowing into two young girls and their mother with her car.

The punishment verdicts for intoxication assault and failure to stop and render aid followed more than three hours of jury deliberations and a week of emotional testimony in which the parents of Ava Lopez, 18 months old at the time of the April 2009 wreck, described her fight to survive after incurring severe brain injuries.

The decision not to send Julie Ann Bronson, 45, to prison left Ava's mother, Traci Lopez, inconsolable. The only member of the Lopez family to watch the announcement, she left the 290th State District courtroom sobbing, surrounded by friends and district attorney's office staff.