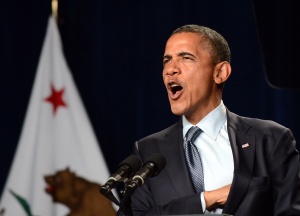 Though the Obama campaign has repeatedly attacked Mitt Romney for his career at Bain Capital, President Obama still accepted $7,500 in campaign contributions from two Bain executives. His campaign press secretary, Ben LaBolt told The Politicker the president has no intention of giving the money back.

“No one aside from Mitt Romney is running for President highlighting their tenure as a corporate buyout specialist as one of job creation, when in fact, his goal was profit maximization,” said Mr. LaBolt.  ”The President has support from business leaders across industries who have seen him pull the economy back from the brink of another depression, manufacturing and the auto industry revived, and support his agenda to build an economy that lasts where America outinnovates and outeducates the rest of the world and economic security for the middle class is restored.”

On Tuesday, Vice President Joe Biden defended the attacks on Mr. Romney’s tenure at Bain Capital. Though he insisted he wasn’t “criticizing private equity firms,” Mr. Biden said there were many examples of Mr. Romney and his Bain colleagues causing tremendous harm.