Born to work for the TSA 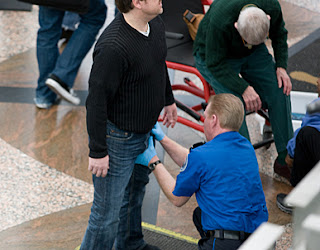 You gotta be freaking kidding me!!

I guess however he was imminently qualified to be touching your 'junk' and now is paid to do so.

PHILADELPHIA (CBS) – The CBS 3 I-Team has learned that a Catholic priest who was removed from the ministry over sex abuse allegations now holds a sensitive security post at Philadelphia International Airport.

The security checkpoint between Terminals D and E is a busy place where thousands of people – including lots of kids – pass through every day. But you might not believe who the I-Team observed working as a TSA supervisor at that checkpoint this week: Thomas Harkins.

Until 2002, Harkins was a Catholic priest working at churches across South Jersey. But the Diocese of Camden removed him from ministry because it found he sexually abused two young girls. Now, in a new lawsuit, a third woman is claiming she also is one of Harkins’ victims.