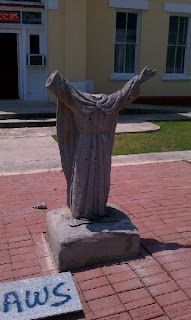 Is this the start of retaliation against Catholics for filing suit over the contraception mandate in Obamacare?

Which is NOT an issue of contraception but an abridgment of religious freedom.

Jesus statue decapitated on South Side
By Robert Kolarik - Express-News


Vandals have damaged a statue of Jesus at a South Side Catholic center, WOAI-TV is reporting.

A worker at the Catholic Center for Charismatic Renewal in the 1700 block of South Flores Street told the station that someone knocked the head off the statue Sunday night. The head was left on the ground behind the statue.

Apparently, the cover from a San Antonio Water System utility hole was used to bash the statue, WOAI adds.

The rest of the story:  (links to original article)
Posted by Sam at 7:27 AM