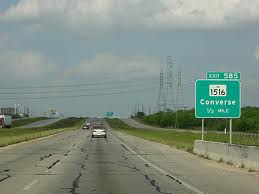 A man suspected of killing his estranged wife was arrested yesterday.

Joiner asked a neighbor to call 911 around 1 a.m. Saturday, saying that his wife had shot herself in the head, according to an arrest warrant affidavit. Police found Elizabeth Joiner, 44, bleeding but alive at a home on the 100 block of Meadow Drive in Converse and rushed her to the San Antonio Military Medical Center, where she later died, the affidavit shows.