Fingered by the cops 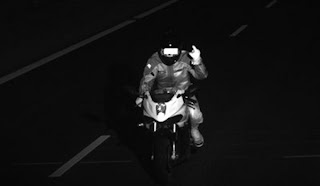 Don't be so rude.

His speed was so excessive that each race through the tunnel would earn him a months ban from the road - if only the police could catch him. But his souped-up bike had no plate, leaving the police unable to trace him.

The police finally snagged the rude teenager on the 26th time since mid-March. The teenager was hit with a fine, penalty points and a driving ban for each offense.
Posted by Sam at 8:25 AM