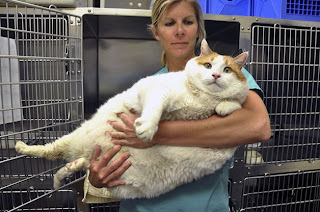 The Occupy movement was overjoyed until they found it was a real fat cat and not a banker/capitalist.

This cat was truly bigger than the 99%.

SANTA FE, N.M. (AP) — A cat that got national attention for tipping the scales at 39 pounds has died from apparent complications of his morbid obesity, an animal shelter said Monday.

The orange and white tabby named Meow, who was between 2 and 5 years old, was taken to the Santa Fe Animal Shelter & Humane Society last month after his 87-year-old owner could no longer take care of him.
The shelter put Meow on a diet and posted all his weigh-ins on a Facebook page that got national attention.