Oh oops, I had an accident 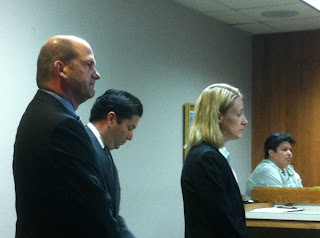 This is absolutely pathetic.

This is someone who should go away for as long as possible IMHO.

Sparks shot from the bottom of Julie Ann Bronson's Mercedes like Roman candle fireworks followed by a trail of smoke on the evening of April 23, 2009, moments after she plowed into two young children and their mother as they picked up grass clippings in their yard.

As Officer David Neal pulled behind Bronson at about 50 mph, noticing that two of her tires had been obliterated, he tried to initiate a traffic stop. But Bronson, 45, continued to swerve along eastbound Loop 1604 for about 5 more miles, seemingly oblivious to his blaring siren and bullhorn despite her convertible's top being down, he recalled.

It was the most bizarre traffic stop the then-rookie officer ever had conducted, he told a jury Wednesday as Bronson's punishment trial for intoxication assault and failure to stop and render aid continued.