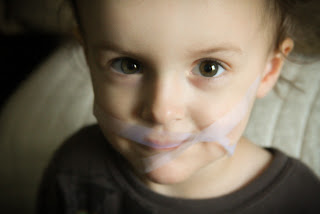 Of course she mentions nothing about what her son may have otherwise done to merit the punishment.

Perhaps that may be a bit of the problem.  Hmmm?

A woman says she’s outraged that her 10-year-old son was told by his teacher to wear scotch tape over his mouth at Pearsall Intermediate School, WOAI-TV is reporting.

“It hurts me, it makes me mad and it angers me,” the woman, who didn’t want to be identified, told the station. “I know he can talk, but the tape goes too far.”

She claims the boy had to wear the tape over his mouth for almost an hour and he began feeling light-headed, WOAI says.