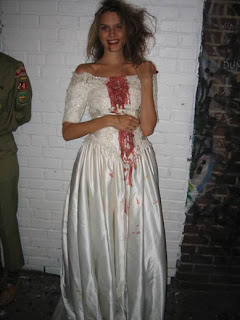 Hopefully your killer will be found and brought to justice.


By Becky Schlikerman, Carlos Sadovi and Steve Schmadeke Tribune reporters
The last time her family saw Estrella Carrera, she had just gotten married to the father of her youngest child.

They started getting worried the next day when the 26-year-old Carrera failed to pick up the child, a 2-year-old boy, and her 9-year-old daughter. On Sunday, a sister called police.

Officers arriving at Carrera's apartment in Burbank found her dead of stab wounds in a dry bath tub. She was still wearing her wedding dress. Authorities said they believe the slaying was domestic, but would not elaborate. No one is currently in custody, police said.