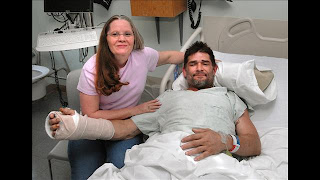 What?  No warning rattle?

I'd add failure to rattle to the suit too.

LEWISTON, Idaho (AP) — A man says he reached down to pick up a stick lying in the gardening aisle of a Wal-Mart in eastern Washington state, only to discover that it was a rattlesnake that then bit his hand.

Mica Craig says he was shopping in the outdoor garden department of a Clarkston store when he was bitten Saturday. The 47-year-old man says it latched onto his hand and that he screamed, shook loose the snake and stomped it to death.

The Lewiston  Tribune  in Idaho reports a bystander drove Craig to an emergency room in nearby Lewiston. Craig says he was treated with six bags of anti-venom and was told that his hand could be permanently disfigured.