The World's "policeman" is off-duty 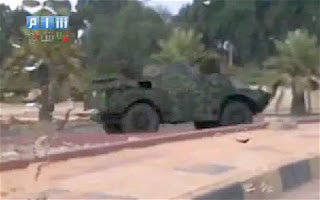 Hah, we ain't gonna do shit and Assad knows it.

Like our president memorably said.  "Don't call my bluff!"

Assad defies US as crackdown continues
The Syrian president, Bashar al-Assad, has put himself on a direct collision course with Washington after sending in tanks to crush anti-government protests in his country's main port city.
The Telegraph -


Armoured vehicles rolled into the palm-lined streets of Latakia, on Syria's Mediterranean coast, less than 24 hours after the US Secretary of State, Hillary Clinton, issued a direct warning to Mr Assad to "immediately stop the violence".

By yesterday afternoon, phone lines and internet lines to Latakia had been largely cut off, but activists said spoke of "intense" gunfire rocking city for at least an hour and a half during the morning, with at least two people killed.
The continued aggression by Damascus against pro-democracy campaigners will make it all the more likely that Washington will now call explicitly upon President Assad to step down, something it has so far avoided for fear of being seen to interfere in Syrian affairs.