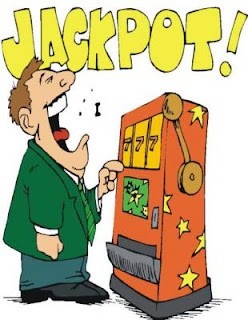 So you win but you didn't win?

Lucy, the casino has some 'splaining to do!

Besides they didn't say no they most likely said nein!

BREGENZ, Austria (AP) — It seemed too good to be true — a slot-machine jackpot of almost 43 million euros. And maybe it was.

Austrian state broadcaster ORF reports that Behar Merlaku is going to court over the refusal of the Bregenz casino to give him what he considers his win on March 26.

Casino officials do not dispute that the gaming machine showed a payout of nearly 43 million euros — almost $62 million. But they say that a malfunctioning computer chip was responsible for what they say was the faulty display.