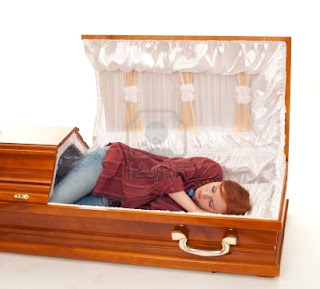 Maybe they were vampires?

BRISTOL, Tenn. (AP) - Police in Tennessee were called to a funeral home where workers found two intruders sleeping inside caskets.

The employees at Weaver's Funeral Home in Bristol called police around 10:30 a.m. on Tuesday after finding two men asleep in caskets. The men fled through a window after police were alerted, the Bristol Herald Courier reports.

One man escaped, but police caught and arrested Barrett Lance Hartsock, who was charged with burglary and vandalism over $1,000.