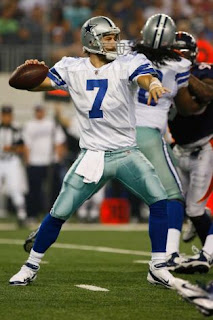 No this is a quaterback I like.  Cool in the stretch and under stress.

Get rid of Tony Romo now while he has some value.

And even though the stakes weren't anywhere near as high as when Green Bay and Pittsburgh squared off in the Super Bowl six months ago, the preseason opener between Dallas and Denver provided plenty of thrills.

Rookie Dwayne Harris caught a 13-yard touchdown pass from Texas A&M alum Stephen McGee on fourth down with 15 seconds left, and McGee passed to Martin Rucker for the 2-point conversion to lift the Cowboys to a 24-23 win.