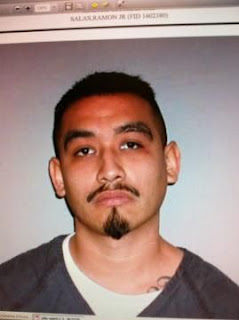 Why did they let him leave the courthouse to turn himself in later??

Especially if you say he's an armed and dangerous fellow.

Did he promise sweetly to return like a good boy?

San Antonio police are seeking a fugitive last seen Monday night at The Lodge at Westover Hills Apartments on the Northwest Side.

Ramon Salas Jr., 29, was last seen at the complex on the 9900 block of Hyatt Resort Drive. He is “armed and dangerous” and known to carry weapons, according to a U.S. Marshals Service press release.

The convicted drug dealer was supposed to turn himself in to serve a 60-month sentence for possession with intent to deliver cocaine, the release stated, and it is “highly possible that he is still dealing narcotics.”