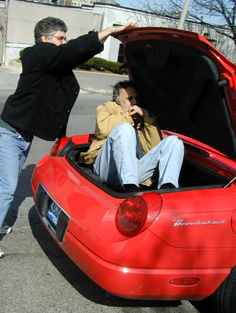 I hope they find whoever is responsible.


A woman was found dead Wednesday inside the trunk of a vehicle parked in a West Side neighborhood.

Authorities found the decomposing body shortly before 2 p.m. in a maroon Ford Thunderbird abandoned near the corner of 26th and Ruiz streets.

The vehicle and its owner had been reported missing over the weekend, and investigators were working to identify the body but could not yet confirm if she was the missing owner, said Sandy Gutierrez, a San Antonio Police Department spokeswoman.