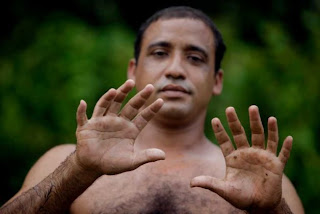 Man, he would have been a hell of a violinist wouldn't he?

Yoandri Hernandez Garrido's nickname comes from the six perfectly formed fingers on each of his hands and the six impeccable toes on each foot.

Hernandez is proud of his extra digits and calls them a blessing, saying they set him apart and enable him to make a living by scrambling up palm trees to cut coconuts and posing for photographs in this eastern Cuban city popular with tourists. One traveler paid $10 for a picture with him, Hernandez said, a bonanza in a country with an average salary of just $20 a month.

"It's thanks to my 24 digits that I'm able to make a living, because I have no fixed job," Hernandez said.