Time to think it over 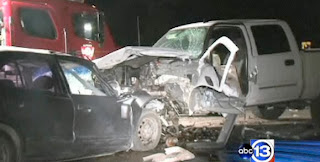 Thank you Judge Melisa Skinner on behalf of a grateful community.

My condolences and prayers go out to the family of Maria Costilla.  May she Rest in Peace.

A drunken driver who made a U-turn on Interstate 35 last year — killing an Illinois woman in a head-on collision and injuring three of her family members, then urinating on the road as he insisted that it was their fault — was handed the maximum possible sentences Wednesday.

Santiago Torres-Torres, 35, was ordered by state District Judge Melisa Skinner to serve 20 years for intoxication manslaughter and three concurrent 10-year sentences for intoxication assault. He was also ordered to pay $40,000 in fines and $90,000 in restitution for the family's medical bills.

Jose and Maria Costilla were driving back to Illinois from Mexico, where they had visited family and bought a quinceañera dress, when the wreck trapped Maria Costilla, 45, in the Ford F-150 just before 2 a.m. April 4, 2010. She died an hour later. Her husband, their older daughter and their 7-month-old granddaughter were injured.