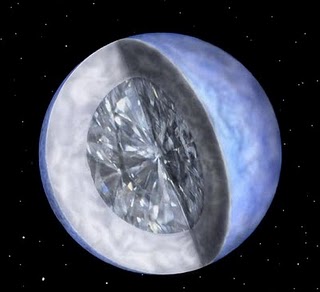 How many carats is it?  A googleplex bazillion carats?

Stop there and get a piece of the rock.

So, if there were life forms there, what would pass for jewelry?

A hunk of limestone?


(Reuters) - Astronomers have spotted an exotic planet that seems to be made of diamond racing around a tiny star in our galactic backyard.

The new planet is far denser than any other known so far and consists largely of carbon. Because it is so dense, scientists calculate the carbon must be crystalline, so a large part of this strange world will effectively be diamond.

"The evolutionary history and amazing density of the planet all suggest it is comprised of carbon -- i.e. a massive diamond orbiting a neutron star every two hours in an orbit so tight it would fit inside our own Sun," said Matthew Bailes of Swinburne University of Technology in Melbourne.