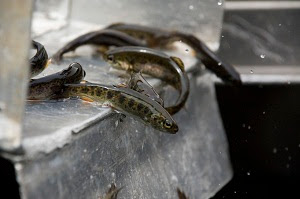 FRESNO, Calif. (AP) — Somewhere in California, someone has a truck load of stolen merchandise that probably is starting to stink.

What's believed to be the first-ever large-scale theft from a fish hatchery in the state has wardens from the Department of Fish and Game scouring markets and roadside stands looking for thousands of pounds of trophy-sized trout.

Workers on Sunday arrived at the San Joaquin State Fish Hatchery to find the gate pried open, blood covering the floors and 70 dead trout left behind. Department spokesman Patrick Foy said as many as 1,000 trophy trout were stolen.