Time to drop the charges 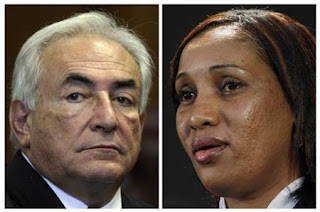 How long now before the Manhattan District Attorney's Office drops the criminal charges?

I mean if she is now willing to drop the charges if she is givene money how likely is her version of the events now?


(Reuters) - Lawyers for the woman who accused former IMF chief Dominique Strauss-Kahn of sexual assault have explored a deal in which they would scuttle the criminal case in exchange for a monetary settlement in the civil lawsuit, the Wall Street Journal reported on Friday.

The woman's lawyer, Kenneth Thompson, strongly denied the report, which the Journal sourced to unidentified people briefed on the matter.

The report comes ahead of Tuesday's scheduled court hearing in which Strauss-Kahn, once seen as a leading contender to be the next president of France, was due to appear before a judge for the first time since he was freed from house arrest on July 1.