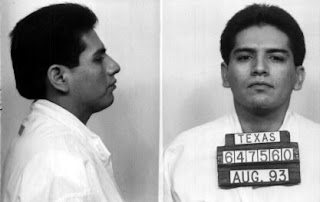 If he's already been found to not be mentally retarded or ill why ask for the testing now?

Is this just a delaying action on the part of the defense?

Death Row inmate back in S.A. for hearing
Attorney asks judge for more time to have client retested for retardation.
By Craig Kapitan - Express-News


A death row inmate from San Antonio convicted a decade ago of raping and strangling a 7-year-old girl will likely be executed early next year, a judge announced Wednesday as the inmate briefly returned to the courtroom.

State District Judge Mary Roman was initially expected to announce a November execution date for Guadalupe Esparza, 46, who was a registered sex offender with Mexican Mafia ties when he killed Alyssa Vasquez near her West Side home in 1999.

But at the hearing Wednesday, defense attorney Michael Gross asked the judge for more time to have his client retested for mental retardation. Gross said it is only the second time in his career that he has asked for such a test this late in the process, but that he felt it necessary based on conversations with Esparza and from reviewing the inmate's letters.