The faces of the immigration issue 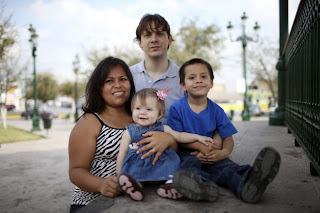 I agree that they knew they did wrong.

I cannot agree she should be banned from applying for a visa for ten years however.

A family is exiled from the U.S.
By Lynn Brezosky - Express-News

But Yedid's parents in Cuernavaca, Mexico, were struggling to keep a taqueria stand going despite her diabetic father's sore-ridden feet and her mother's failing legs. As entrepreneurs, neither qualified for any government medical care. Yedid wired money from cleaning and baby-sitting jobs to help them buy medicines, but longed to be able to travel to see them.

And so, four years after meeting at the Home Depot where he worked, three years after marrying, a year after their son Teddy was born, they decided to petition for her visa.