Look out!! The Austerity Express is coming to a town near you soon. 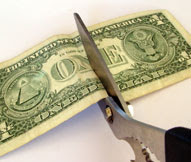 Maybe one way to help with this issue is to consolidate the several different law enforcement agencies and streamline the bureaucracies, eliminating a lot of the "fluff" and layers of middle management.

Put some officers back on the streets and the like.

I am not saying its a great solution but it could help.

Grants for new police at risk
By Jessica Kwong - Express-News


As the battle over how to cut government spending rages on in Washington, a grant that has helped local law enforcement agencies put hundreds of new officers on the streets is emerging as a likely casualty.

A slash to zero funding proposed for the Office of Community Oriented Policing Services next fiscal year would butcher a hiring grant that, for local governments that secure it, picks up the tab for three years of new officers' salaries and benefits.

Since its creation in 1994 under the U.S. Department of Justice, the grant has brought 123 officers to the San Antonio Police Department, 14 to the Bexar County Sheriff's Office and a few to smaller area police departments.