Gambling. What are the odds you'd get arrested for that? 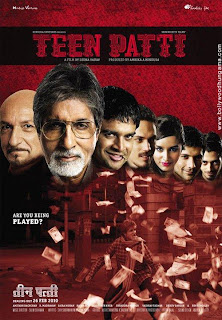 Sometimes it is interesting to read things about crimes elsewhere because even though in English its almost non-understandable in its own way.

For example what is the game of teen-patti or teen-pathi (flush)?  Just how much is Rs 5.42 lakh in cash and the like?  Find teen-pathi here.

I'm not being a chauvinist, I find it interesting.

MLA's son held for gambling
The Times of India

MUMBAI: An MLA's son, Abhishek Mehta, was arrested with 22 others for gambling in a five-star hotel in the suburbs on Sunday.

Officers from the Social Service Branch (SSB) recovered Rs 5.42 lakh in cash and five bottles of liquor from their seventh-floor suite at Imperial Palace Hotel in Goregaon (E). Police said Abhishek (23) is the son of BJP MLA from Ghatkopar (E), Prakash Mehta.

"We had received a tip-off . Most of the arrested accused are businessmen from Thane, Ghatkopar and Mulund. They were playing teen-patti (flush) and placing bets," said ACP Vasant Dhoble of the SSB.