Not a good ending for him 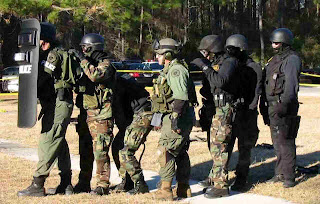 Well, you shoot at the Po-Po and this could happen to you.

I'm sorry for the family because it sounds like the fellow had some issues.

So perhaps there was a touch of suicide by cop in this.

A 42-year-old man died in a hail of gunfire Saturday night after an hourslong standoff with deputies in Northeast Bexar County.

Authorities said the man fired at Bexar County Sheriff's Office SWAT team deputies as they entered his home in the 9400 block of Fulwood Trail, east of Windcrest. They returned fire, killing him.

The man's mother and other family members told investigators the man had poured gasoline on himself and would not let them inside, telling them to leave, said sheriff's office spokesman Lou Antu.