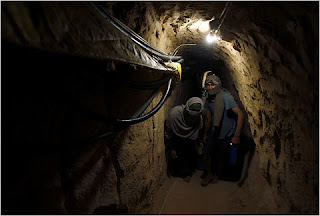 Why didn't anyone over here discover the tunneling?

Wouldn't it be noticed at all by the Border patrol?

I guess it would depend on how far it had been dug; was it under the US border when it was discovered?

Mexican troops have discovered an unfinished 300-meter (980-foot) tunnel beneath the US border that would likely have been used to smuggle drugs and people, officials said Friday.


Mexican General Alfonso Duarte announced the find, saying the entrance to the tunnel was inside a house in the border town of Tijuana that was made to appear as though it was under construction.

He added that 10 people were detained in the operation, including a woman who had been helping to dig the tunnel for nearly a year.