I guess he went back to school shopping 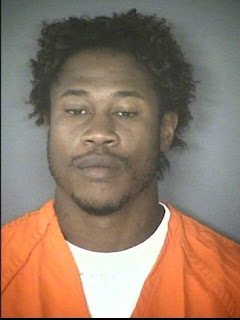 Holy smokes they are lucky they weren't killed.

This incident is Exhibit A in why I avoid North Star Mall like the plague.

Kudos to the police officers who recognized him from the video tape the following day.

San Antonio police Saturday night arrested a man suspected of trying to rob a couple at gunpoint and shooting one victim in a parking garage at North Star Mall.

Derrick Woolridge, 29, is being held in Bexar County Jail on one count of aggravated robbery. A judge set bail at $75,000.

An arrest warrant affidavit states police working surveillance at a VIA bus stop near the mall Saturday spotted Woolridge, who was still wearing Mardi Gras beads, a blue bracelet and a pair of sandals, and recognized him from footage of the robbery.