It seems like the whole world has gone mad

What is going on these days? 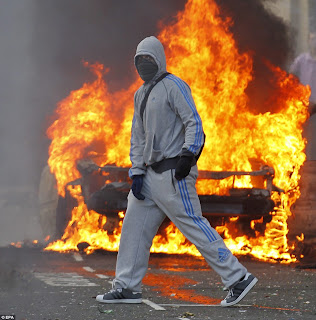 I hope things get put back in order in great Britain soon.

David Cameron today warned rioters that they would face the 'full force of the law' as he recalled Parliament, after violence swept across the country for a third night.

An unprecedented 16,000 police officers will be on the streets of the capital tonight, the Prime Minister announced, compared with just 6,000 last night. Today huge swathes of the capital woke up to the charred debris of burned out buildings and streets littered with waste.

Theresa May caused fury today by appearing to rule out using the Army and water cannons to quell any future disorder. Police were last night criticised for being absent when much of the looting and ransacking took place and, when they were present, keeping their distance from rioters.

Today a 26-year-old man who was shot as he sat in a car during rioting in Croydon died in hospital.