What we have here is a good start 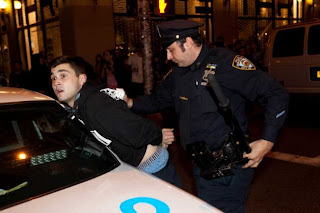 They needed to arrest more of them.

NEW YORK (AP) — Police arrested 70 protesters at New York's Zuccotti Park early Tuesday, including some who chained themselves together, while clearing the park so that sanitation crews could clean it.

Concerns about health and safety issues at Occupy Wall Street camps around the country have intensified, and protesters have been ordered to take down their shelters, adhere to curfews and relocate so that parks can be cleaned.

At about 1 a.m. Tuesday, New York City police handed out notices from Brookfield Office Properties, owner of Zuccotti Park, and the city saying that the park had to be cleared because it had become unsanitary and hazardous. Protesters were told they could return in several hours, but without sleeping bags, tarps or tents.