Did not pass the job interview test 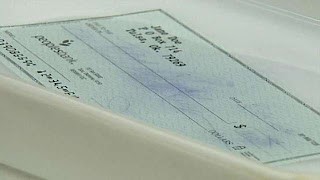 Well I guess he didn't get the job.

Clyde Frampton Sr., the man who stole checks from a prospective employer during a job interview, was sentenced this week to three to six years in prison.

Police said Lincoln Cold Storage's manager contacted police in October 2010 after noticing that a dozen blank business checks were missing from the office.

When he reported the missing checks to the bank, he was told four had been cashed, payable to Frampton, for $1,600.