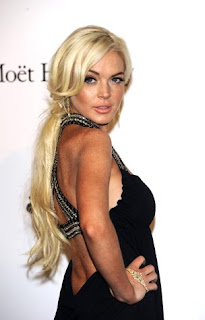 Okay, well there you go.

According to the radio news I heard on the way in LiLo did her 30 days in jail in 4 hours.

As if she'll learn jack-shit from all this.

It's a fricking joke, is what it is.  A fricking sick joke.

And one others are watching and learning from as far the sickening California justice system goes.

LOS ANGELES (AP) — Lindsay Lohan has checked into jail for a 30-day sentence, though she could be released within hours due to overcrowding.

Los Angeles County records online show the "Mean Girls" star was booked into a jail in Lynwood on Sunday night. Lohan had until Nov. 9 to report for her term, which a judge ordered after finding the 25-year-old violated her probation by being terminated from a community service assignment at a women's shelter.

The judge imposed a complicated sentence, telling Lohan that she will now have to perform all of her community service at the county morgue or risk serving an additional 270 days in jail.