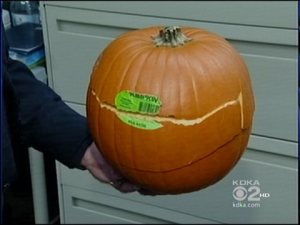 Well at least they turned themselves in.

OAKMONT (KDKA) — Four teenagers have turned themselves in after pelting a man with a pumpkin.
The attack happened on Pennsylvania Avenue in Oakmont.

Rose and Daniel Wagner were out for a stroll when Daniel, 64, was hit and suffered a concussion.

A surveillance camera at a nearby school recorded a white SUV driving away from the scene.