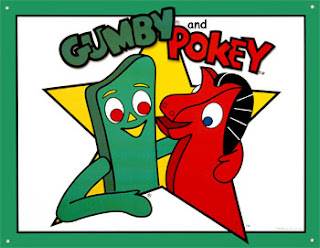 He pled guilty to burglary!

If Gumby violates his probation he will get to really be in the Pokey.  (*nudge, nudge**wink, wink*)


SAN DIEGO (AP) — A man accused of trying to rob a San Diego 7-Eleven while dressed as Gumby has pleaded guilty to misdemeanor burglary.

A lawyer for 19-year-old Jacob Kiss entered the plea Wednesday. Kiss' accomplice, 20-year-old Jason Giramma, also pleaded to the same charge. Both men were placed on three years of probation.

The San Diego Union-Tribune (http://bit.ly/rUcmV2 ) reported that the men will be allowed to withdraw their pleas if they comply with the probation terms.

Police say the men entered the convenience store on Sept. 5. A clerk says the Gumby character claimed to have a gun but in a television interview, Kiss says the clerk misunderstood him. Kiss and Giramma turned themselves into police days later and the Gumby suit was seized.

The attempted stickup was captured on videotape.