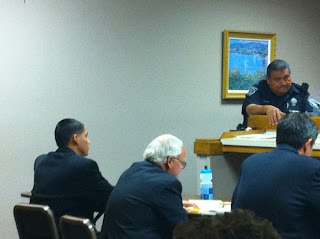 Waiting on a verdict.

James Garza was 17, “a scared young man” under the control of a friend, when he helped lure an acquaintance to a parking lot to steal his car, his lawyer said Monday.

But the acquaintance, Mario Raygoza, 19, was stabbed to death and Garza faces an automatic sentence of life in prison without parole if the jury in his capital murder trial finds him guilty. The panel was unable to reach a verdict after deliberating more than five hours and will resume today.

There was “absolutely no question” Garza, now 19, was guilty of aggravated robbery, defense attorney Wayne Huff told jurors in closing arguments. Garza and Stephen Vogt, 19, “were going to use knives to scare (the victim) for his car” and take off to Colorado to get away from their disapproving parents.