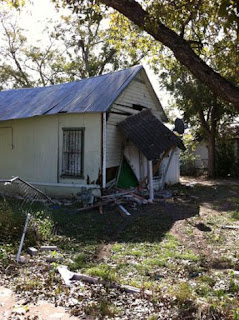 A woman driving a Ford Mustang was traveling south on SW 34th Street when she attempted to turn on Motes Drive at a high rate of speed and lost control of her vehicle, traffic investigators said. The car went barreling through a fence and into a home at the 600 block of SW 34th Street.

A man who was sitting on a couch inside the home was apparently struck, and he was taken to a local hospital with minor injuries.