All your embassies are belong to us!! 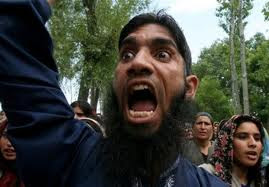 If Margaret Thatcher were the P.M. she'd have kicked their collective asses for doing this.

Civilized countries don't do this.  But then whoever said Iran was civilized?

And they may have nuclear weapons soon?  Wonderful.

The attacks followed the rapid approval by Iran's Guardian Council of a parliamentary bill compelling the government to expel the British ambassador in retaliation for the sanctions, and warnings from a lawmaker that angry Iranians could storm the British embassy as they did to the U.S. mission in 1979.

Several dozen protesters broke away from a crowd of a few hundred protesters outside the main embassy compound in downtown Tehran, scaled the embassy gates and went inside. Iranian security forces appeared to do little to stop them.