Burl Ives must be turning over in his grave 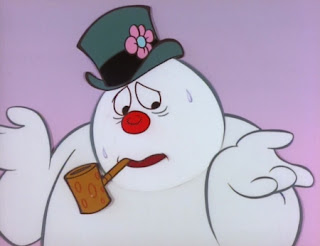 What has the world come to?

Say it ain't so Frosty!!

CHESTERTOWN, Md. (AP) — Who says "Frosty the Snowman" has to be jolly?

A man in a "Frosty the Snowman" costume was arrested Saturday during the annual Christmas parade in Chestertown, on Maryland's Eastern Shore. He's accused of scuffling with police and kicking at a police dog.

Sgt. John A. Dolgos tells The Star Democrat of Easton that 52-year-old Kevin Michael Walsh became agitated when a dog-handling officer tried to escort him away from the crowd.

Walsh told The Associated Press that he has dressed as Frosty in the parade for at least 10 years. He says he was wrongfully arrested. He says an officer hassled him after he remarked about the police dog's presence. He says he became agitated only after getting arrested.

Walsh was released on his own recognizance.