The end of a strange tale 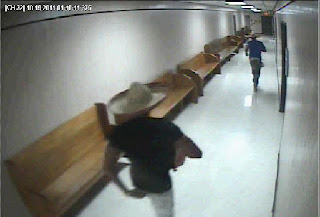 Two French brothers jailed since being caught last month cavorting in the Bexar County Courthouse corridors after hours in sombreros and carrying a judge's gavel should be out of jail in time to fly home on their original Dec. 8 return airline ticket.

The district attorney's office and the lawyers for Mehdi Ajjaid, 21, and Hichan Ajjaid, 25, worked out a deal that allows the men to plead guilty to the state jail felony of burglary of a building with intent to commit theft but only receive a Class A misdemeanor sentence.

The brothers' Alamo City antics made international headlines following their arrests in the early hours of Oct. 19, after worries of a possible terrorist attack gave way to head-shaking over what a night of downtown partying could lead to.