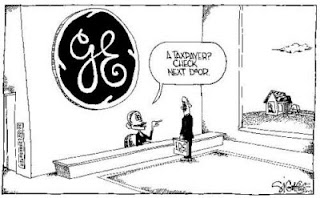 General Electric, one of the largest corporations in America, filed a whopping 57,000-page federal tax return earlier this year but didn't pay taxes on $14 billion in profits. The return, which was filed electronically, would have been 19 feet high if printed out and stacked.


The fact that GE paid no taxes in 2010 was widely reported earlier this year, but the size of its tax return first came to light when House budget committee chairman Paul Ryan (R, Wisc.) made the case for corporate tax reform at a recent townhall meeting. "GE was able to utilize all of these various loopholes, all of these various deductions--it's legal," Ryan said. Nine billion dollars of GE's profits came overseas, outside the jurisdiction of U.S. tax law. GE wasn't taxed on $5 billion in U.S. profits because it utilized numerous deductions and tax credits, including tax breaks for investments in low-income housing, green energy, research and development, as well as depreciation of property.

"I asked the GE tax officer, 'How long was your tax form?'" Ryan said. "He said, 'Well, we file electronically, we don't measure in pages.'" Ryan asked for an estimate, which came back at a stunning 57,000 pages. When Ryan relayed the story at the townhall meeting in Janesville, there were audible gasps from the crowd.