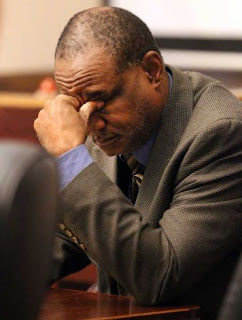 Former Bexar County Democratic Party treasurer Dwayne Adams was escorted to a jail cell in handcuffs Monday after jurors found him guilty of embezzling about $200,000 from the political organization.

It took the jury two hours to reach the guilty verdicts for theft and misapplication of fiduciary property between $100,000 and $200,000. Both offenses are second-degree felonies, punishable by up to 20 years in prison. Adams has applied for probation.

Jurors are set to return to the 227th state District Court this afternoon as testimony begins for the punishment phase.