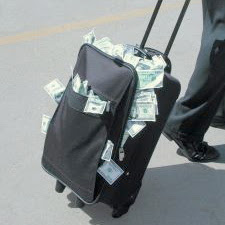 Okay. Besides the obvious, "who walks around with a suitcase with a million bucks in it?"

Is the next question.

Who the hell leaves a suitcase with a million bucks in it behind when they leave a restaurant?

SYDNEY (AP) — A man questioned by Australian police about an abandoned suitcase stuffed with nearly 1 million Australian dollars ($970,000) has been charged with assault and dealing in the proceeds of the crime.

New South Wales police announced the charges Friday, but they haven't said where they think the money came from.

Workers at a Sydney eatery say the suitcase was left there Tuesday by a nervous-looking man, and they were initially worried it might contain a bomb.